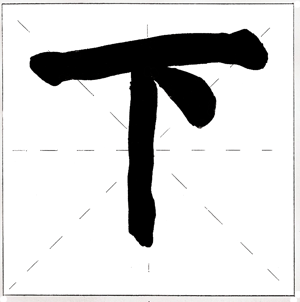 The balance of the character is an important consideration. It is ok to be heavier on the top or heavier on the bottom characters although they should be balanced geometrically. However, charactes should to be balanced from left to right in terms of weight. Because most characters are not symmetric this means that the main stem will not be centered or the strokes will be longer or thicker on one side. Imagine if the ink was made of iron then the center of the square that the character is set in must also be the center or gravity of the character. Notice in the 下 character above the main stem is to the left of center. This is to balance the 右下点 lower right dot, which would otherwise make the right side heavier. However, we can see that the distance from the middle of the character to the top is about the same as from the middle to the bottom. In the 主字（颜体） Zhu character below the middle horizontal stroke is slightly below the center of the square to make the character balanced top to bottom. 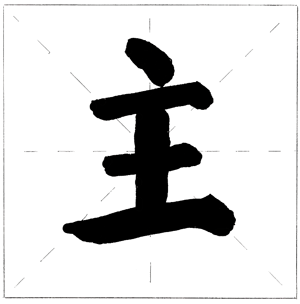 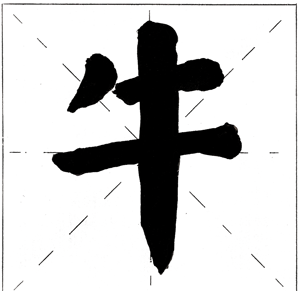 In Yan style the horizontal lines tend to be thinner than the vertical lines, and this difference is exaggerated compared with other regular script styles. In the 内 character below the the right vertical is thicker than the left vertical stroke and the top horizontal line.

The length of strokes needs to be adjusted to meet the needs of the individual characters so that the character as a whole is well laid out. For example, in the 牛 character above the top most horizontal stroke is shorter on the left side to accomodate the 短撇 short downwards left curved stroke. The lower horizontal stroke is longer on the left side because the vertical stroke is to the right of center. In the 四字（颜体） si character below the two interior strokes are not formally named as fundamental strokes because the are simple and do not occur frequently. Nevertheless, they are needed for this character. 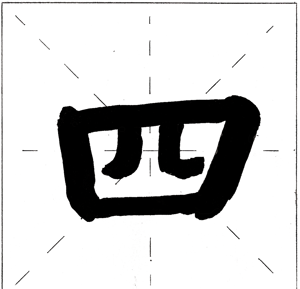 Stroke order is an additional consideration. In general the stroke order is the same as writing with a pen but there are some exceptions. Left before right, top before bottom, inside before outside but finish the inside before closing the gate. In the 四字（颜体） si character above the two interior strokes must be drawn before completing the character with the lower horizontal stroke.

Strokes are connected to each other like wooden joints in carpentry (without nails). Strokes should be next to each other and mostly touching but distinct.

The forms of characters that we use in calligraphy sometimes match the forms that specific calligraphers used rather than the modern equivalent. For example the character 平 ping in Yan style is often drawn as shown below, which is a form that was common during the Tang Dynasty at the time of Yan Zhenqing. 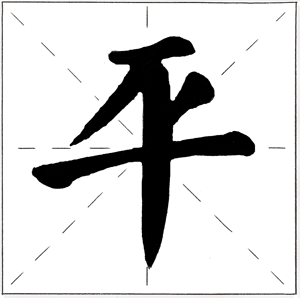