The main theme of this section is to gain an appreciation for the central political power that emerged in Bronze Age China and the ceremonial artifacts that they used to symbolize that power.

Bronze is an alloy of copper and tin or copper and lead. It is the earliest metal alloy produced by humans. Bronze has a lower melting point that copper but is harder. Bronze is also a good metal for casting because it contracts little during cooling. Chinese bronze ware is impressive in its workmanship and many pieces, such as the one below, are also impressive in their size. In ancient China, especially before the Tang dynasty, bronze artifacts were important possessions and a key indicator of social status. Bronze artifacts were used for ceremonies, as weapons, musical instruments (bells), and as other tools and utensils. Bronze ware had a central place in ceremonial rites and, in fact, most bronze ware that has been found in Xia, Shang, and Western Zhou sites was for ceremonies. Even though the Bronze Age began slightly earlier in Samaria and Egypt, China seems to have been more prolific in the quantity, diversity, and high quality of the bronze ware produced in ancient times. 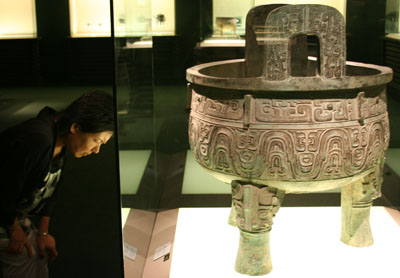 Many bronze ware artifacts carry inscriptions about the owners and events of the time with high historic value. The ding above is one of the prize possessions of the Shanghai Museum. It has special historic significance because of the inscription that describes the ceremony where King Zhou conferred an official post on the owner of the ding, Ke. The inscription throws considerable light on the political situaion of the time.

Naturally occurring copper was the first metal used by people for tools. It is highly malleable and was used to make knifes and jewellery. The earliest copper tools found in China were found Shaanxi a dates to about 4,700 BCE. It was used by people from the Yangshao culture. Later on people learned how to smelt copper from ore and add lead and tin to it to create bronze.

Most bronze artifacts in China have been found in archeological excavations. A few were discovered in historic times and passed on since then.

Bronze began to be used later in the Longshao culture. The earliest bronze artifacts discovered in China so far are a knife and knife fragments dating to about 3,000 to 2,300 BCE. They were found in Dongxiang, Gansu. Bronze casting need a mold, also known as a die, usually made from clay. The earliest bronze ware used a single mold. As the artifacts became more sophisticated they were made with two and more molds. The decorative patterns and inscriptions were carved into the molds. Early molds could only be used once.

Bronze is an early example that demonstrates that most technologies that build on an earlier technologies. The techniques for making pottery were adapted to build the clay furnaces to generate temperatures high enough to melt copper, lead, and tin, and also to create moulds to cast bronze ware. The inspiration for many bronze artifacts also came from pottery. So, bronze ware would not have been possible without pottery. The picture below shows a clay mould from the Late Shang used to cast a bronze lei, a kind of vat. Clay was the most common mound material for making bronze ware in ancient China. 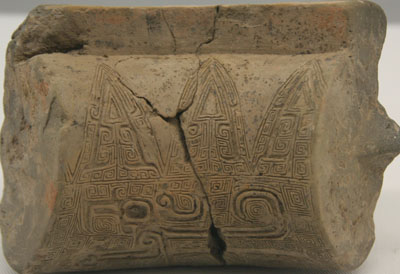