The term ceramics 陶瓷器 includes pottery 陶器, terracotta 赤陶, and porcelain 瓷器. Porcelain differs from the pottery that it evolved from in the firing temperatures and vitrification (transformation into glass) of the clay. Porcelain needs to be fired at a temperature of at least 1,200°C, use clay with at least 2% iron, and have an even application of glaze.

Porcelain originated in China and is one of China's great contributions to the world. Porcelain artifacts from China have been highly prized around the world for the last two thousand years. Chinese porcelain is immediately impressive to look at but most people probably would not guess the depth and breadth of the technology and artistic talent behind it.

Porcelain was produced at centers, actually factories, where expertise and facilities were concentrated. The term kiln 窑 expanded in meaning from an oven for firing pottery to include the entire porcelain factory. A type of kiln called the dragon kiln 龙窑 appeared in the Warring States period that could reach high temperatures. The first kiln of this type was in the city of Zeng in Guangdong. Later, another kiln was built at Shanglu in Zhejiang in the Eastern Han. The kiln type is long compared to its width and uses rising heat from a heating chamber at its base. There is a smoke vent at the top, which can be blocked to obtain a reducing atmosphere. By the Eastern Han it could achieve the temperature of 1,200 degrees Celsius needed for firing porcelain. Other types of kilns were developed later. A replica of the egg-shaped kiln used at Jingdezhen in the Qing is shown below. 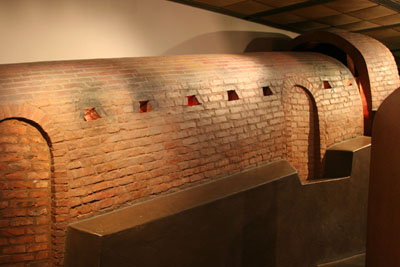 Well known early kilns in the Tang included the Yue Kiln 越窑 near present day Shaoxing in Zhejiang province and the Wuzhou Kiln 婺州窑 near Jinhua, also in Zhejiang. The Yue Kiln well-known for producing celedon 青瓷, a green colored variety of porcelain. In the Song Dynasty porcelain reached a peak with kilns being set up all over China, each one having its own unique style.

Perhaps the most famous is the imperial Jingdezhen Kiln 景德镇窑 in present day Jiangxi province, which is still a major center for porcelain today. A picture of the Jingdezhen Kiln imperial porcelain factory is shown above. The well known blue and white porcelain 青花 was developed at Jingdezhan in the Yuan Dynasty. The clay used at Jingdezhen is taken from a nearby hill called Gaoling 高岭, which is the orgin of the English word Kaolin, a common type of clay with a white color. One of the best known kilns in Northern China is the civilian Cizhou Kiln 磁州窑, located in present day Hebei province. 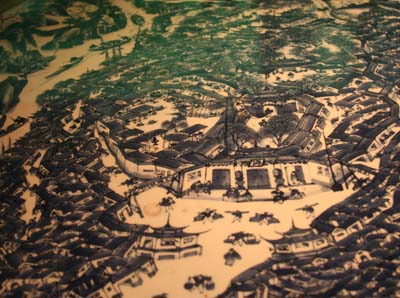 In the Yuan Dynasty, during the period 1214 to 1234, author Jiang Qi 蒋祈 wrote the historic book The Records of Ceramics 陶记 documenting the production of ceramics at the Jingdezhen Kiln. The book is of great historic value, including all the types of craftspeople involved, the sales, marketing, tax, and government regulation of the items. Later, in the Ming, Song Yingxing wrote the book called Heavenly Creations 天工开物 on agriculture and crafts, which included a chapter on ceramics.

Seals 款 were printed on the base of porcelain works starting in the Yuan Dynasty. A seal from the Kangxi reign, Qing Dynasty is shown below. The seal reads made during the reign of Emperor Kangxi, Qing Dynasty 大清康熙年制. Some seals omit Qing Dynasty 大清, consisting of the remaining four characters. 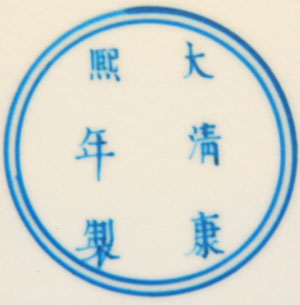 A seal from the Jiaqing reign, Qing Dynasty is shown below. It is much more stylized and less legible than the earlier Kangxi seal but contains the comparible six characters. 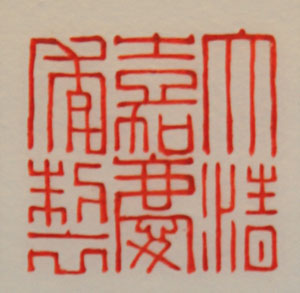 A seal from the Daoguang reign, Qing Dynasty is shown below. As in the Jiaqing seal, there are six characters in two lines, with a line being vertical since the seal reads top to bottom. 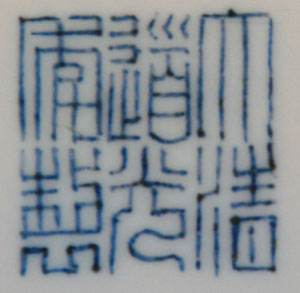