The main theme in looking at early pottery is the emergence of Chinese civilization in the late Neolithic. The development of pottery is linked to the development of agriculture and establishment of fixed residences. Prior to this, hunter-gatherers, who were on the move all the time could not carry such heavy things around.

Making pottery was the first human experience in changing a material into a another that could be used for tools and utensils. Pottery is different from earlier implements made from stone and bones in that the clay that pottery is made from can be molded, dried in air, and then hardened in a fire. It is a perfect medium for art, either by sculpture or by painting. The earliest Neolithic pottery in China dates to about 8,000 BCE. The oldest piece found to date is a jar discovered in Wannian County, Jiangxi Province. The jar shown below excavated from Xinglongwa 兴隆洼 site in Aohanqi, Inner Mongolia is representative of early pottery. Simple geometric patterns are apparent on the outside. 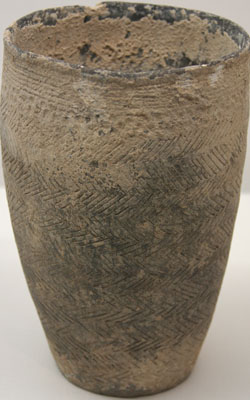 The main technologies relating to pottery that were developed over the Neolithic were firing techniques, paint materials, and use of a wheel. Early pottery differs from porcelain in the lower firing temperatures used. Of course, in the Neolithic there was no way to measure the temperature and early pottery was fired in open fires. The main benefit of firing at low temperatures is reducing the amount of moisture in the clay. Besides moisture in the pores of the clay, there is also water bound (hydrated) in the complex chemical compounds that form clay. This water can also be reduced and that also changes the chemical structure of the clay resulting in harder clay artifacts.