The same types of decorative designs have also been applied to carved stone. The specific designs vary with the context that they appear in. Carved stone is mostly used in architectural structures like temples, palaces, other important buildings, and tombs. The different types of carving include full form sculpture 圆雕, relief sculpture 浮雕, open work 透雕, and engraving 刻花.

Before the invention of steel all carving was done by abrasion roughing out first with stone hammers. Metals developed before steel are not hard enough to carve any but the softest rocks. The use of steel chisels enabled the creation of fine stone carvings. Carving did was not well developed until about the end of the Han Dynasty (202 BCE —220 CE) and reached a peak in the Tang (618—907). Examples of well known locations of stone carvings in China are the Longmen Caves 龙门石窟 in Henan (Northern Wei to Northern Song), Mount Maiji Caves 麦积山石窟 in Gansu (Northern Wei to Qing), and Yungang Caves 云冈石窟 in Shanxi (fifth to sixth century).

The picture below shows a huabiao 华表 in front of Tiananmen. The decorative pattern on the column is a traditional Chinese cloud and dragon design. A huabiao is a column traditionally erected in front of palaces and tombs. A mythical create called a denglong 蹬龙, one of the nine children of the dragon, is sitting on top of the column. 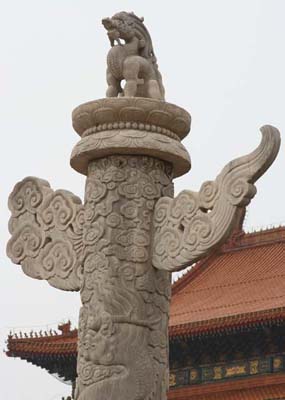 The stone slab shown below is located in the center of the Imperial Boulevard 御道 in the Forbidden City. Waves, mountains, clouds, and dragons are carved in the white marble slabs, each of which weighs over 250 tonnes. 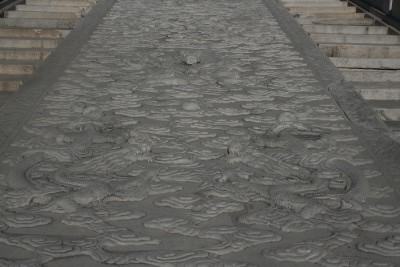 The sundial shown below located in the Forbidden City was a symbol of the emperor's power and his ability to grant time to people. 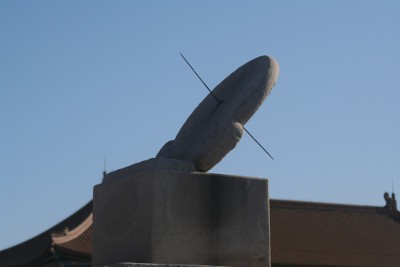 The picture below is from the Qing Dynasty Yuan Ming Yuan ruins in Beijing. Yuan Ming Yuan 圆明园, also known as the Old Summer Palace, located in Beijing was destroyed by British and French troops in 1860 as punishment for not buying opium. These carvings are European in style. 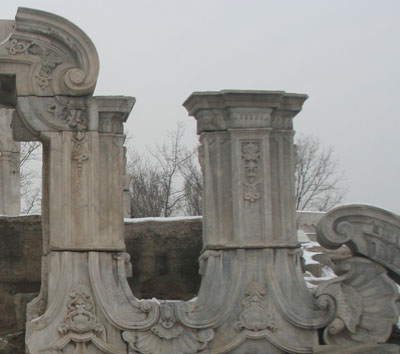 Nine is an imperial number and dragons are a symbol of the emperor, which makes Nine Dragon Wall 九龙壁 a very imperial relief sculpture. Surprisingly, there are many Nine Dragon Walls in China but the most famous is located in the Forbidden City in Beijing.

Homophones are common in Chinese and frequently used for symbollic meaning. A homophone of bat 蝙蝠 is "to become rich" 变富. A picture of relief sculpture of a bat on a railing at Lingyin Temple, Hangzhou is shown below. 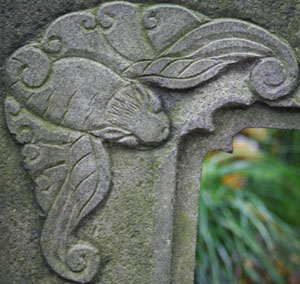 The scene with the elephants below is an example of a relief sculpture. The relief is relatively deep. 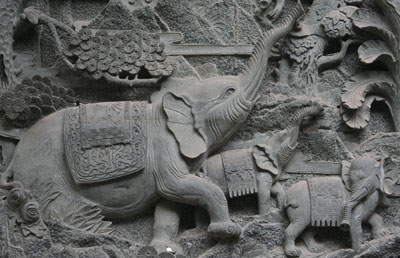 The scene with the monkey below is an example of open work. Open work sculpture is often used for windows in temples and gardens to let a certain amount of light in. 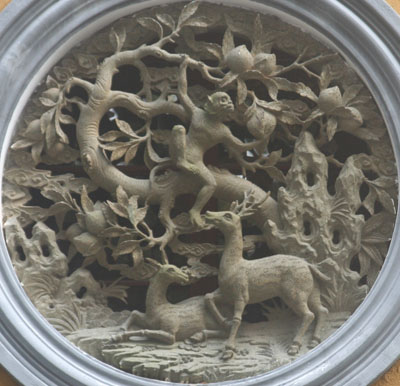 Relief sculptures can also be created using shallow relief with contrasting areas emphasized using different degrees of polish. An example of this is shown below in the bamboo relief sculpture where the raised areas have been polished. The purple granite resembles the color of the purple bamboo that is the namesake of the temple.