The Zhou clan overthrew Emperor Wuwang of the Shang Dynasty in 1,046 BCE. The zhi 觯, a kind of wine cup, below belonged to an official named Shan, who was rewarded with this prize for his part in a campaign to thwart a Zhou come back. The inscription inside the zhi provides valuable archaeological confirmation of ancient written records and that the commander of this particular battle was the Duke of Zhou 周公旦. 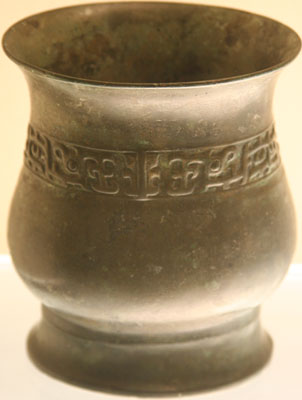 The Western Zhou period ended in 771 BCE when some members of the ethnic tribe Quan Rong captured the Zhou capital and killed Emperor Youwang. The workmanship improved greatly in the Western Zhou resulting in some very high quality artifacts, even by modern standards.

The use of bronze ware artifacts in religious ceremonies of the Shang continued in the Zhou Dynasty. In addition to the vessels of the Shang, bronze musical instruments used in ceremonies have also been found. In the middle period, marked by the reigns of Emperor Muwang (976—922 BCE) and Emperor Yiwang (885—877BCE) artifact types and decorations changed. Wine and food vessels became less common and utensils and musical chimes became more dominant. Ribbon and abstract geometric patterns replaced the mythical taotie animal of the Shang Dynasty. The kuilong dragon pattern became popular. 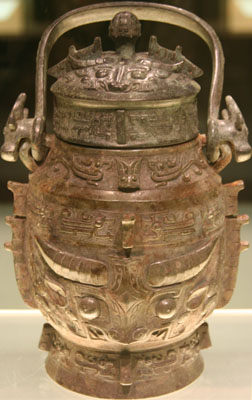 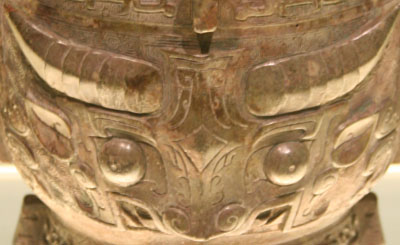 The zun, shown below, is a large wine vessel. It appeared in the Shang and continued to be used until the Western Zhou. The neck and bellie of the zun is decorated with taotie designs. The corners of the shoulder are decorated with elephant heads with upturned trunks and tusks. The background is covered with fine lightening patterns. There is an inscription in this artifact indicating that it was made as a vessel for a sacrificial ceremony for Gui Gu. 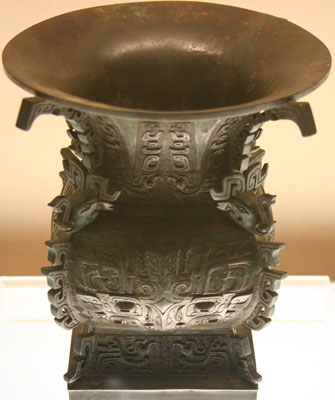 There are many idioms associated with ding. For example, 一言九鼎 “words of enormous weight”, literally one word worth nine sacred ding, the nine ding symbolizing the rule of China; and 大名鼎鼎 “renown.” 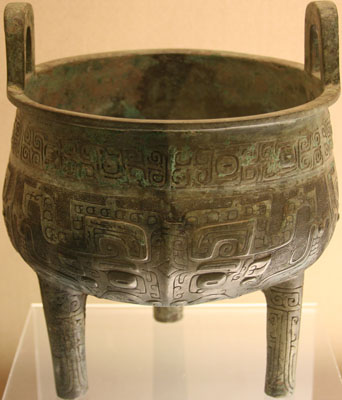 The jue, shown below, is a three legged vessel for drinking wine. Bronze jue evolved from pottery jue in the Xia Dynasty. 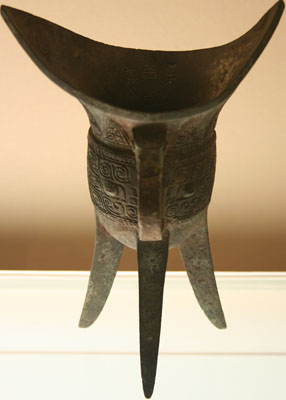 The historic text Rites of Zhou mentions sacrificial rites with six zun and six yi. An yi is shown below. 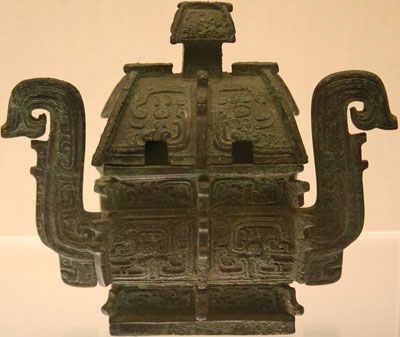 The gui appeared in the Shang dynasty and is a food vessel for holding broomcorn millet and other food. In the Western Zhou the gui started to be used in even numbers with the ding in odd numbers. For example, the emperor would use nine ding and eight gui and high level nobles would use seven ding with six gui. 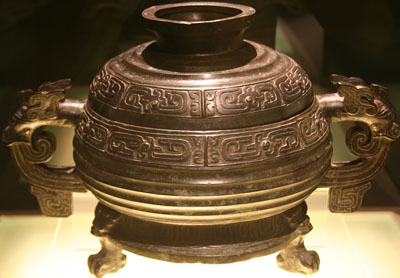 After ceremonial vessels, weapons made up the next greatest proportion of bronze ware. For example, in the Shang concubine Fu Hao's tomb, about 30 percent of the bronze artifacts were weapons. After the end of the Warring States Period, Emperor Qin Shi Huang, confiscated all bronze weapons. Some of the bronze weapons, such as the battle ax below, were primarily for ceremonial use. 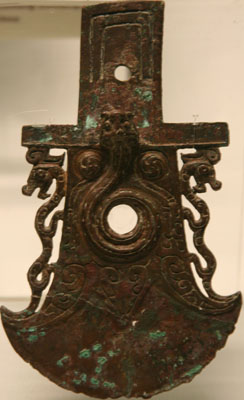 The yi 匜 is a pitcher shaped water vessel. The yi shown below is 48 cm long and weighs over 6 kg without water in it. The yi appeared in the Western Zhou. The parallel designs give the feeling of flowing water. 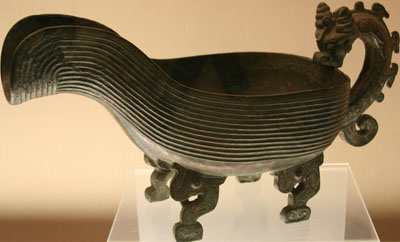 The xu 盨, shown in the picture below, is a kind of covered food vessel that evolved from the gui for holding millet, broomcorn millet, rice, and sorghum. The xu disappeared in the Spring and Autumn period. 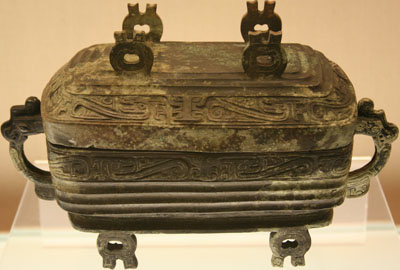