Blue and white porcelain 青花 is the most characteristically Chinese of all porcelain. It was first developed at Jingdezhen Kiln in the Tang and later mastered during the Yuan Dynasty. During the Yuan blue and white porcelain was made in limited quantities, mostly for export. The cobalt blue color was initially imported but later on mined within China from Leping in Jiangxi. However, during the Ming and Qing dynasties it became the most popular kind of porcelain. The Jingdezhen Kiln produced the highest quality and greatest volume of this kind of porcelain.

The vase below with a cloud and dragon design has an the characters “spring longevity” 春寿 inscribed. The characters are written in Jiudie Script 九叠篆, literally, nine folded script, developed in the Sui and Tang for official seals. 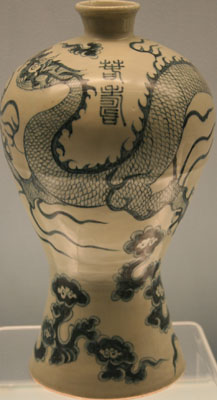 During the Yuan Dynasty there was a great deal of cultural exchange with the Middle East The shape of the oblate flask below is inspired by Islamic silverware. 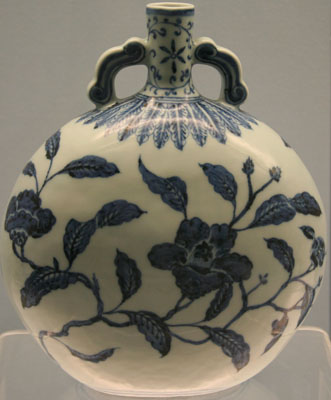 The plate below shows a design with two phoenixes. 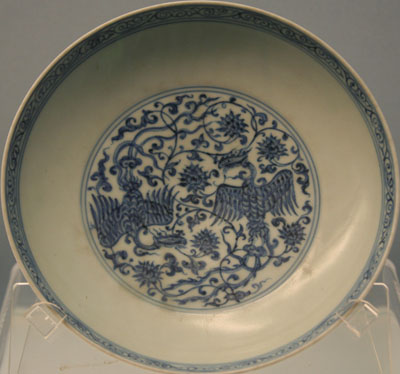 The qilin sometimes called a Chinese unicorn 麒麟 is a mythical animal associated with good luck. The qilin below decorates a blue and white porcelain plate.

The blue color was obtained from adding cobolt to the glaze. The blue underglaze was applied first and then a clear glaze applied over the top. It was fired in a single time at a high temperature. The plate shown below, also from Jingdezhen Kiln, has two lions playing with a ball, a symbol of power. 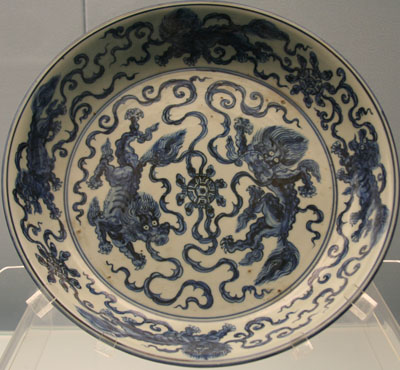 The plate below was created with a brown on white glazed 白釉酱色 technique, which was developed during the Xuan De reign (1426—1435) of the Ming. A floral design 花果纹 decorates the plate. 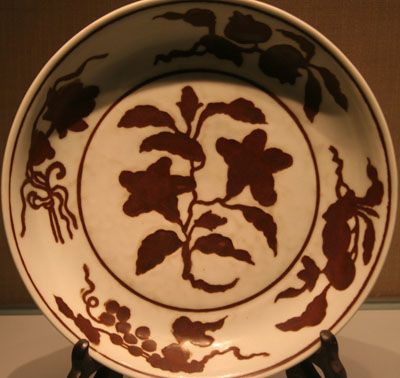 The sea has symbolized beauty, hope, and wisdom in Chinese thought. For example, the Eighty Eight Buddhas Repentance Text 八十八佛忏悔文 contains the words “wisdom like an ocean” 智慧如海. 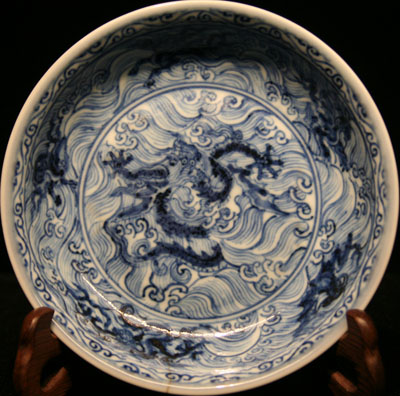 During the Yuan Dynasty the ruling Mongols had an empire that stretched from China to Europe and trade expanded greatly. During this period most of the highest quality porcelain ended up outside of China. The Topkapi Palace in Turkey houses the largest collection of Yuan Dynasty blue and white porcelain in the world. Interestingly, most of the blue cobolt coloring was imported from West Asia. Export of porcelain on a large scale continued in the Ming and Qing dynasties. The plate below with Arabic text was probably intended for export to the West Asia. 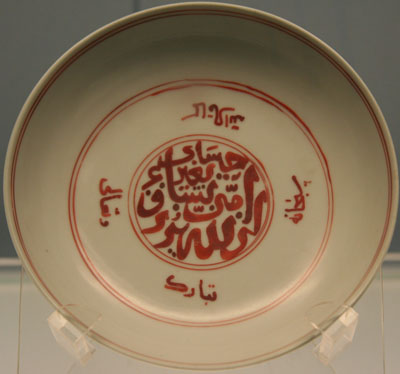 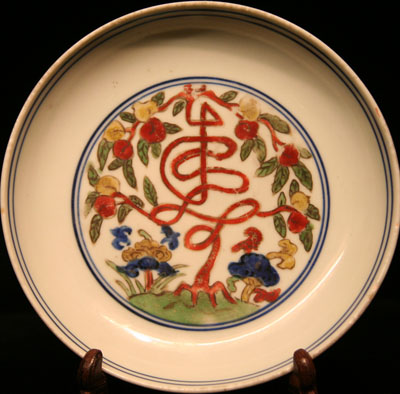 The porcelain censer below was glazed with a doucai 斗彩 process, which is a overglaze technique (see below) used in the Ming. The eight trigrams 八卦 design has roots deep in Chinese mythology. 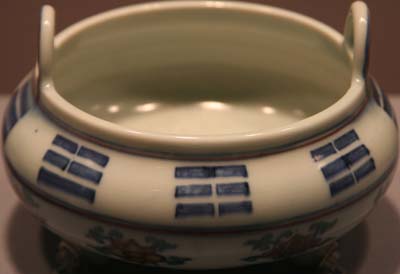 The plate below shows a wucai (five colored) design, which refers to a method for applying the glaze. This was an overglaze technique, meaning that the artwork was applied over the top of the glaze in addition to outlines created with underglaze outlines. In blue and white porcelain, where the artwork is painted below the glaze with only underglaze. Overglaze porcelain uses a lower firing temperature, from 750 to 900 degrees Celsius. Wucai porcelain began to become popular in the mid to late Ming. 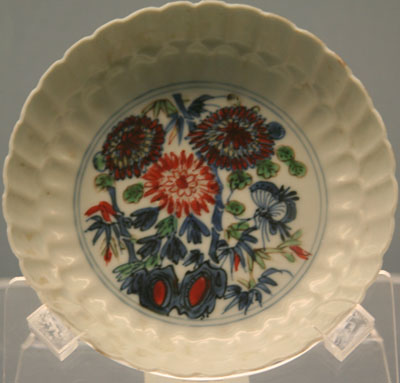 The butterfly is a beautiful insect and a symbol of felicity. The chrysanthemum is a popular flower in China and used in tea and Chinese medicine. It is an emblem of mid-Autumn and a symbol of joviality. 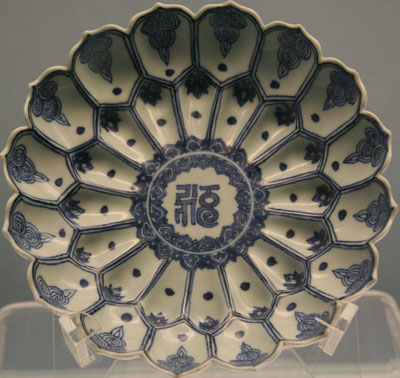