Sakyamuni Buddha 释迦牟尼佛, also known as Siddhattha Gotama (c. 500 BCE), was the founder of Buddhism. Bronze has a history of over 1500 years for Buddhist artifacts, mostly for statues, incense burners, and bells. The statue below is an early one from the Northern Wei. The striated pattern on the nimbus or halo 背光 behind the Buddha is very effective in bronze. 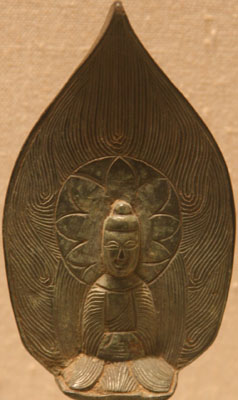 Besides Sakyamuni Buddha, other buddhas are mentioned in Buddhist sutras. According to the Amitabha Sutra 阿弥陀经, Amitabha Buddha 阿弥陀 is the founder of the Western Pure Land 西方极乐世界. Chanting Amitabha Buddha's name is a common practice for the Pure Land School 净土宗 of Buddhism, which is one of the most common schools of Chinese Buddhism. In the bronze artifact below shows three Amitabha Buddha figures with hands showing speaking the Dharma mudra 说法印, indicating that Amitabha is expounding the teachings of the Buddha. 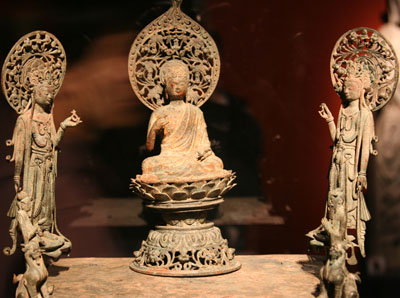 In the picture his hands are in a Dhyana mudra 禅定印, symbolizing meditative concenration. This is the same hand position taught in Buddhist medication classes. 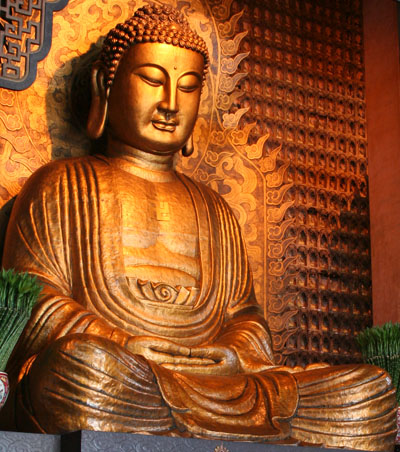 Mount Putuo 普陀山 is one of the Four Sacred Buddhist Mountains of China 四大佛教名山and the earthly abode of Avalokitesvara Bodhisattva 观音菩萨. The recently cast statue shown below is one of the main attractions of Mount Putuo. The statue was created in 1997. Located on the southeast corner of Mount Putuo, at 18 meters tall on a 13 meter tall platform, it is visible from a great distance. The statue was cast with a gold colored bronze alloy and weighs over 70 tonnes.

The incense burner below was constructed in the shape of a pagoda 佛塔, which is related to the use of pagoda's for keeping the relics of important Buddhist figures. 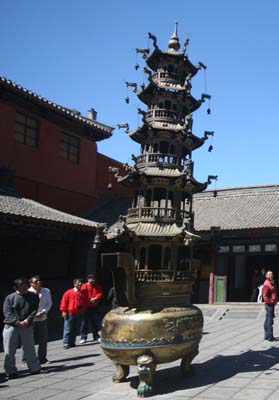 Many incense burners have a flame emblem on top. This one from Linyin Temple in Hangzhou was nearly as impressive as the blaze coming from the pile of incense below.

Prayer wheels 传经筒 contain prayers or sutras and are spun to transmit them to world, which is the literal meaning of the Chinese word. They are mainly used in Tibetan Buddhism 藏传佛教. The prayer wheel shown in the picture below is located at the Lama Temple 雍和宫 in Beijing. 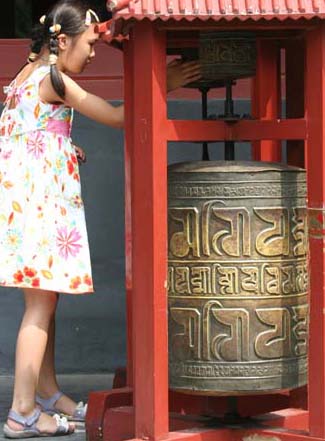 Four-faced Buddha 四面佛 are common in Theravada Buddhism 南传佛教, especially Thailand. Now with the overseas Chinese population mixing more with the Mainland Chinese population it is sometimes seen in China. The photograph below is from a Buddhist temple in Malaysia. 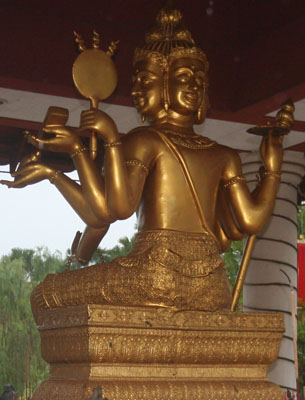