During the Tang (618—907) a technique called underglaize painting was developed. With this technique designs were painted on the roughcast and then glaze was applied over the top. White porcelain was developed in the Norther Qi (550—577) using pure whie roughcasts and glaze from reducing the iron content in the roughcast. The roughcasts and glaze is opal in color and the glaze of some is slightly blue. Pure white porcelain was developed in the Tang. The Yue Kiln 越窑 in Zhejiang was designated as an imperial kiln and people outside of the imperial family were forbidden to use porcelain made there. 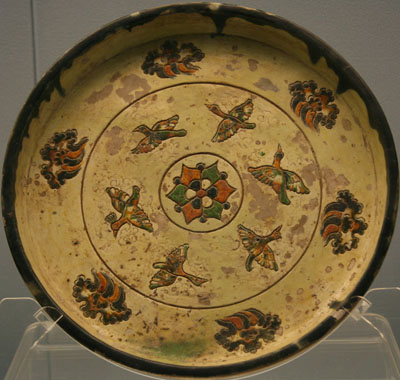 An important development in the Tang was the use of multi-colored glaze, also known as tri-colored glaze or sancai 三彩. This was quite different to the green celedon that preceded it. The glaze was a low temperature glaze mixed with iron, copper, manganese, cobolt, and other metals for coloring and then fired to about 750 to 800 degrees Celsius. The artifacts above and below are Tang sancai porcelain. 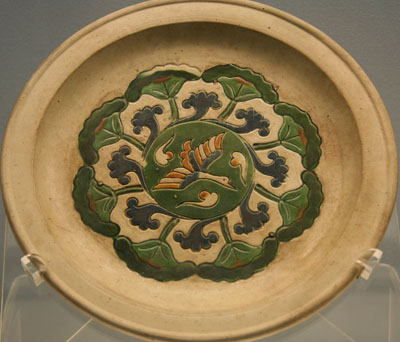 The wild goose is supposedly the bird of the yang 阳 (male) principle. It is also sometimes used in reference to a story of Su Wu 苏武 (140—60 BCE), a Han envoy to the Xiongnu who was kept captive for 20 years and informed emperor Han Wu Di of his location by attaching a letter to the leg of a wild goose. 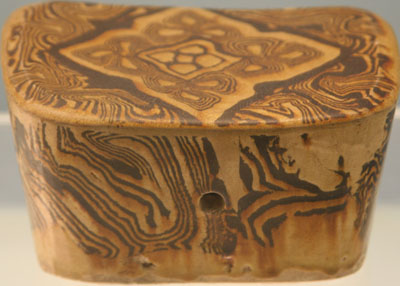 Marbled or jiaotai 绞胎 pottery was developed in the Tang. In this technique alternating layers of brown and white clay are sandwiched together. Then slices are cut from the sandwich and used to create the utensil. The utensil is then glazed and fired. A number of variations are possible using this technique. A marbled pottery pot is shown below. 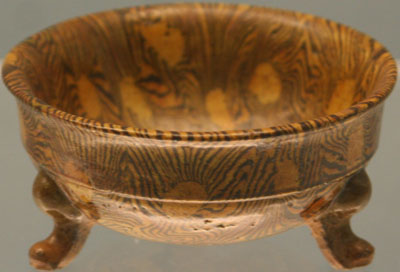 Mandarin ducks 鸳鸯 shown below usually come in a pair, one male and one female. The flask below has two Mandarin ducks.