Silk is a beautiful material with a highly desirable glossy, soft, light, breathable, strong, and durable properties. In ancient China the silk bolts 匹 was a standardized monetary unit and used for large transactions. China maintained a monopoly over silk production for most of ancient history. In ancient times it was highly sought after and a major export from China to the Southwest Asia and Europe. China kept the highly developed process for manufacturing silk secret and Europeans thought that it grew on trees. Silk has been discovered in Egyption tombs dating to circa 1070 BCE. At one point in time, the Roman Empire was China's biggest single silk customer. Even after the Byzantines obtained silkworm eggs in 522, China still maintain dominance of the silk market. Today, it is still the most highly desired fabric for making clothes, superior in most respects to cheaper synthetic fabrics. Probably the best place to see silk clothes and embroidery in China is at the Suzhou Silk Museum.

Silk was first developed in the Neolithic Age in China. Fragments of silk cocoons cut with a knife were discovered in Yangshao Culture Sites in Xia County, Shanxi, dating to between 4,000 and 3,000 BCE. Silk fragments have been discovered in Zhejiang dating to about 2,700 BCE. The silk fragments below, dating to the Neolithic, were found in the Yangshao Culture 仰韶文化 village of Qingtai in Henan.

The bone needles below are reproductions of needles, from originals also from the Neolithic found in the Hemudu Ruins 河姆渡遗址 in Zhejiang. 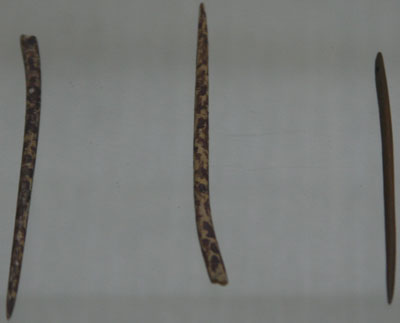 Based on the discovery of related tools, like the weaving implement below, it appears that silk weaving was developed around 4,000 BCE.

Silk comes from the cocoons of silk moths, like the one shown below. Silk worms were strictly guarded until several foreign missions from Japan and Italy smuggled some silk worms out of China. 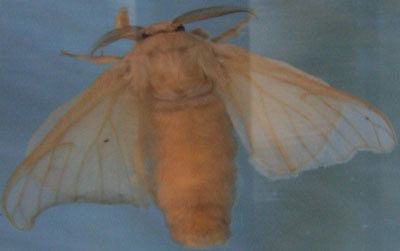 After raising in stands with mulberry leaves, as shown below, the cocoons 茧 are steamed. 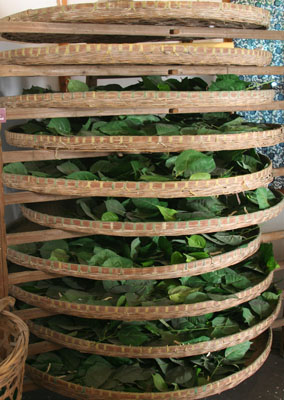 Machinery for silk production was developed beginning around the eleventh century. The Fundamentals of Agriculture and Sericulture, compiled about 1210, has many pictures and descriptions of silk looms and related machinery. The picture below, created in silk, shows part of the process for creating silk by beating it. The picture is one of the series Procedure for Silk Production 捣练图. 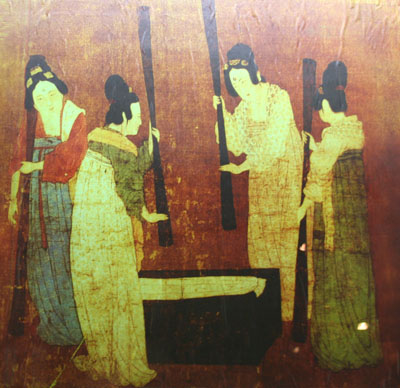 Decorative designs can be embroidered to fit clothes or can be applied to plain fabric. The picture below shows a dragon and cloud design on plan woven silk 绢.

Satin 缎 is a textile with a particular weave that results in a very glossy surface and a dull back. Satin originated in China and the English word comes from the Arabic name Zayton of Quanzhou 泉州 in Fujian where the material was exported from in historic times. The picture below shows a floral design on a satin brocade. 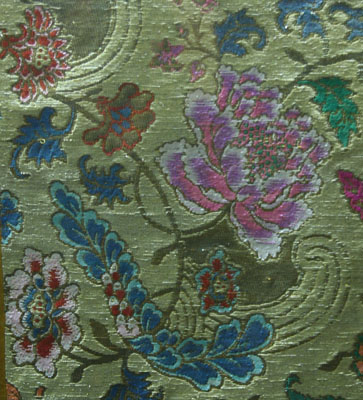 Warp 经 is a set of lengthwise threads held in tension on a loom. Weft 纬 are the horizontal threads. There are many varieties of satin. Satin is a relatively thick weave compared to other silk fabrics, many of which are very light. The thickness results from the use of glossy warp surface layer floating over a weft fill underneath or, vice-versa, the glossy weft surface layer floating over a warp fill. 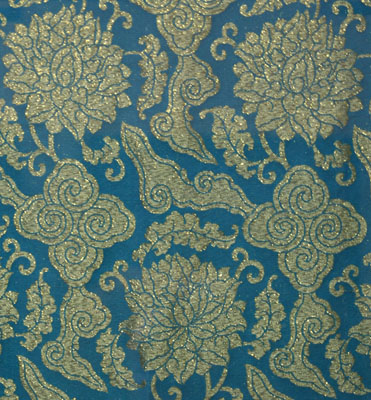 Brocade 锦 is a richly decorated shuttle-woven fabric, often with added gold or silver thread. The picture above shows a brocade with gold thread and a flower and cloud pattern. 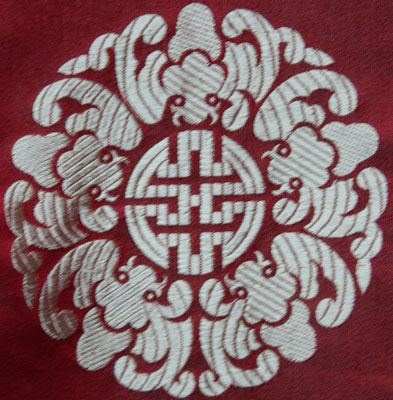 The robe below features the eight divinatory trigrams 八卦 and Yin and Yang 阴阳 design. It was used in traditional opera. 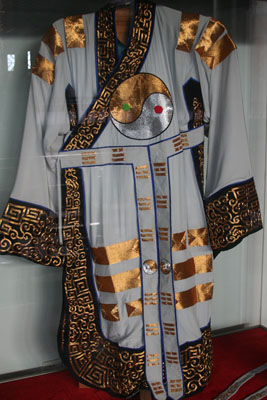